Reality was over-rated when Jesus rode into town.

“Have a blessed Palm Sunday. Remember a week before he was crucified like a criminal, he rode into the city like a king.” -Unknown

Palm Sunday celebrates one of those events in the life of Jesus that is perfect for the unpredictability of early spring. It’s when things appear to be one way, but in reality they can swing in a moment to its opposite. If you live in New England in April, you know that it’s warm enough that you’ll need to run a fan in the house in the morning, and turn on the heat by nightfall.

Palm Sunday's First Illusion: ‘Save Us!’

In fact, Palm Sunday itself is all about illusion. The crowds that gathered on the main thoroughfare of Jerusalem were expecting one of the grand, pompous entries of a Roman Procurator or even a king. They were a form of street entertainment for the low-born masses. That spring day they expected prancing, snorting steeds pulling gold-adorned chariot behind a cohort of sword-wielding soldiers.

But instead, their gaze was met by a donkey whose back was straddled by a low-born Rabbi, his toes grazing the dust in the road. The crowd was stunned. But then some of them recognized this Jesus, the man who had come to save Israel. A cry went up from the people: Hosanna! Hosanna! Which, spoken with passion, means “Save Us! Save Us!”

Of course, Jesus chose to enter Jerusalem not to proclaim his royalty, but to mock the pomposity of the people presently in power. I doubt the people watching the parade understood this. All they knew is that this young Rabbi was, as their minds could process it, a political Messiah who would use the sword to set his people free from Roman bondage. 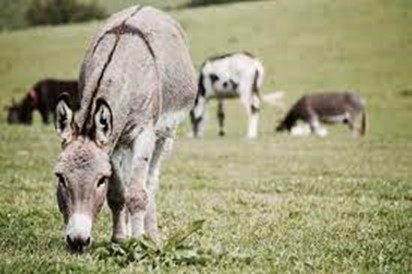 Because of all of the hubbub, all the strewn palms and cloaks on the road, hardly anyone noticed the shadows skulking behind the mob, keeping pace with the little donkey and his holy cargo. It’s interesting how well hatred blends into dark shadows. we see it on the streets of Jerusalem, and in the bombed-out shells of Ukrainian dwellings.

Palm Sunday's Third Illusion: What’s on the Donkey’s Back?

I can also guarantee you that no one in Jerusalem recognized the powerful symbol that this donkey carried on his back, under Jesus. Every donkey is marked with a dark cross that runs over his shoulders and intersects the line that follows his spine. I’ve been with people when they’ve seen a donkey and thought the cross was painted on. But the one who placed the cross there, was the one who originally created these little creatures.

By the time the parade was ending, the warm air of a Judean spring day had become a chill. Another False Spring. Another false Hosanna that all too quickly would turn into cries of “Crucify him!”

On this coming Sunday as we gather amid the green spring smell of fresh palms, we need to anticipate how, on a Golgotha hill, the scent of blood and tears will wash over the few people who had not abandoned God’s perfect sacrifice.

There is a darkness we all carry inside us.  And yet, a Sunrise is coming ... soon.