They were always there for Jesus.

Meet the women who saw somthing beautiful born on the first Easter morning.

They were there. They were ALWAYS there for Jesus.

Sometimes their role was only to follow him and listen to what he taught the people. Other times they were hostesses for dinners, fund raisers for the disciples and the young Rabbi. And then there were the times that only they seemed to understand what a privilege it was to simply be with the Son of God. Even when all others fled, they stayed. Even when staying meant going through agony.

I’m talking about the women, the female followers of Jesus whose contribution to his ministry has, for the most part, gone unnoticed, but was so essential.

There is something special about the feminine spirit that prepares women to be present at the time of great joy and horrific suffering. For each and every one of us, the first face we see when we emerge from the darkness of the womb is a woman – our mother who, even in her agony of delivery, weeps with joy for our existence. Women understand pain, and do not run from it when it gives birth to new blessings.

Who Was Present at the Crucifixion?

And so it was as, one by one, the authorities began to crush the young rabbi, like a grape in a winepress.

His male disciples scattered one by one, even those who vowed they would die for Jesus. And on that morning on Golgotha when his pierced body was hoisted against the darkening Jerusalem sky, only the women were still there.

Mary his mother stood at the foot of the cross where his blood and tears rained down on her. Only John remained to hold her up. 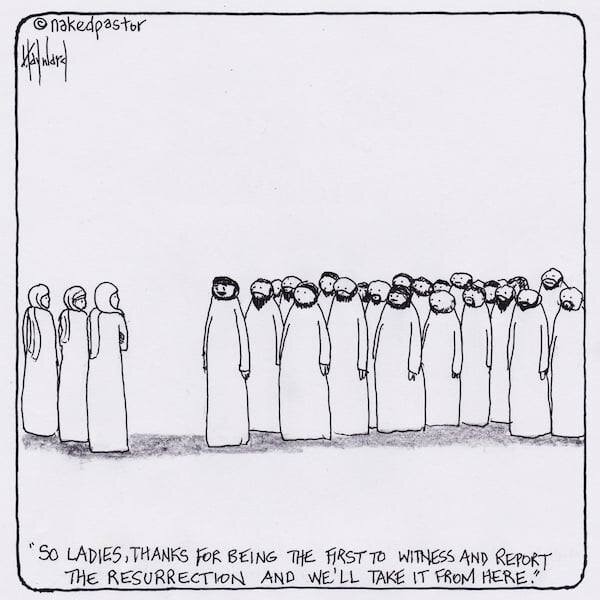 Nearby stood the women, crying and clinging to one another:

They were the ones whose hearts were pierced by Jesus’s final cry, “It is finished.”

Easter: The Death of Death

And then, three days later, it was the women who came to the darkness of the tomb to anoint Jesus’ body for final burial, because no Jewish man was allowed to contaminate himself by touching the dead. Instead, peering into that empty tomb like an abandoned womb, they were greeted by angels.

“Why do you look for the living among the dead? He is not here, but has risen.”

In an instant they knew, something beautiful had been birthed that morning. It was the death of death. The woman ran to tell the other disciples. However the men dismissed their story as a silly tale. It would take Peter’s visit to the tomb before the men believed. But the women, you see, were always there.