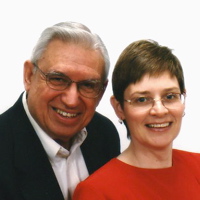 Life seems to go on without effort when I am filled with music” – G. Elliot

Our chancel choir is scheduled to sing this Sunday - choir recognition Sunday. Two of the anthems that we will be singing were composed by Don Besig (BEE’ sig). Don (photo right, with lyricist Nancy Price) taught school for over thirty years. During that time he felt there was a need for choral music for student singers and volunteer church choirs. He began composing in 1960. Over fifty of his compositions have been composed with a former student of his, Nancy Price, who writes most of the words; AND more than 20 million copies of his works have been sold! Nancy Price and Don Besig composed this Sunday’s offertory anthem.

Last summer a couple of days before the Shawnee Press Music Conference that I attend each summer, he had a stroke which has permanently affected his arm. I do not know if he is still composing or not. So I dedicate this Sunday’s anthems to him for all his wonderful anthems that are song throughout the world.

And speaking of musicians, I was so pleased to have received an unexpected call from a former organist and choir director of this church, Tom Powell. He reads our weekly E-Tidings and wanted to talk about the choir and the organ.  He was the music director from 1959-1983. He had 20 to 25 members in his choir and four paid soloists. Some of you may remember Thayer Bowman – also onetime mayor of Danbury who was at that time the bass soloist.

Tom sounded good and said that he still plays the piano, but only at home. I distinctly remember after our first visit to First Congregational Church how we spoke about the quality and sound of the choir, and also of the pastor at that time, Bob Naylor. This was in the mid 70’s!

The last Jazz Sunday until September is scheduled for June 16. On June 23 there may a duet/choir. And a very special quartet is scheduled for our Independence Sunday service on Sunday, June 30th, which will include our annual Patriotic sing-along songs.