What Did Jesus *Really* Want from the Apostles?

Jesus asks each of us to boldly touch and see, to have faith in his promise of eternal life.

What are you most afraid of? I’ve often been amused when watching any of the numerous paranormal shows  on TV that the very people who chose ghost hunting as a hobby/profession are the most likely to go running from a room when they think they’ve seen one. This puzzles me. That’s what you came here to do, and yet when you find it, you scream like a banshee and run?

Our in-Person worship service begins at 10 a.m. Please observe these social distancing guidelines. All are welcomce!

What the Apostles Feared

But this Sunday’s gospel has to do with a bunch of scared men fearing for their lives, behind locked doors, who lose it when the Messiah they love the most does a post-resurrection walk through a wall and says casually, “Peace be with you.”

They of course, since they haven’t accepted Jesus’ triumph over death, think he’s a ghost. I can imagine Jesus sighing at their unbelieving shock and fear, I imagine him saying, “I TOLD you I’d be back after three days ... what’s the fuss about?” To them he’s a menacing wraith that has invaded their hiding space.

What Did Jesus Want?

Jesus, who knows all about the beliefs of first century dwellers, realizes that they think that no ghost can eat food. So he asks the apostles, “What’s for lunch?” It’s not that he had a hankering for a Filet O’ Fish after three days in the tomb. Jesus was hungry, but not for food. He ate the broiled fish they gave him to prove to them that he was a real, solid human being who just happened to be resurrected from the dead – and bringing believers assurance of eternal life.

What Did Jesus Really Want?

What Jesus was really hungry for was that they would be witnesses. He hungered for believers who would go forth and proclaim; witnesses whose eyes he had opened by showing them that no locked door full of their fear could stop him, not any more than a boulder that had sealed a tomb. Jesus needed witnesses so the rest of the world would see and hear the life-changing miracle that God had provided humanity.

What Do Ghosts Tell Us?

It’s still true today, about “ghosts” and the assurance Jesus gives. Author Andrew Smith has said,  “Ghosts are never just ghosts; they provide us with an insight into what haunts our culture.” What fears are you hiding from behind the locked door of your heart? We live in a culture bedeviled by fear of death from pestilence. We live in fear of blind prejudice that hates, maims or kills people of color, Asians in America, and vulnerable elderly. And we certainly have learned in these past weeks of court testimony how vitally important witnesses are.

So what ghosts are hidden behind your locked door? I can guarantee that they are all based on the primal human fear: Death. This is, of course, the one fear Jesus assures us he washed away with his Resurrection. But even today, as some of us face a cancer diagnosis, or chronic illness, even as we see ourselves age, even as we try to raise upstanding children and youth in a hate-filled world, we still cower behind those locked doors. What Jesus is asking each of us today is to boldly touch and see, to have faith that the promise of eternal life was not just for Jesus, but for you and me as well. This weekend we will do our best to “exorcise” those ghosts behind the doors of your heart.

“Ever wonder what people got Jesus for Christmas? It's like, "Oh great, socks. You know I'm dying for your sins right? Yeah, but thanks for the socks! They'll go great with my sandals. What am I, German?" - Jim Gaffigan, stand-up comedian

First of all, let me assure you that, by declaring this coming Sunday Holy Humor Sunday, we truly haven’t lost our marbles. What we ARE doing is reviving a Christian tradition that is over a thousand years old.

In-Person Service begins at 10 a.m. Please observe these social distancing guidelines when you worship with us. 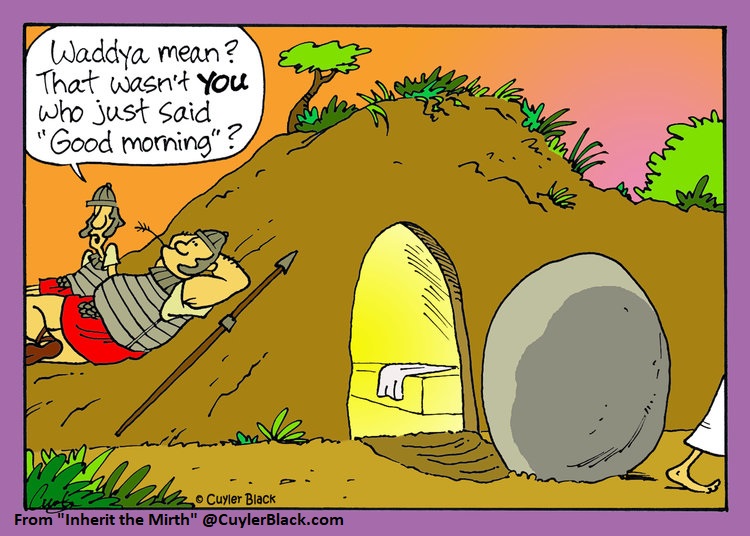 For early Christians, the entire week after Easter was a time of merriment and laughter, even a time of practical jokes. According to The Joyful Newsletter, “For centuries in Eastern Orthodox, Catholic and Protestant countries, the week following Easter Sunday, including "Bright Sunday" (the Sunday after Easter), was observed by the faithful as "days of joy and laughter" with parties and picnics to celebrate Jesus' resurrection. Churchgoers and pastors played practical jokes on each other, drenched each other with water, told jokes, sang, and danced. The custom was rooted in the musings of early church theologians (like Augustine, Gregory of Nyssa, and John Chrysostom) that God played a practical joke on the devil by raising Jesus from the dead. ‘Risus paschalis - the Easter laugh,’ the early theologians called it.”

Enter Laughing and Other Such Silliness

So in this coming Sunday’s service, we’re all about looking at the ways that dealing with us very imperfect, frustrating human beings required God to develop a sense of humor over the eons – you know, much better than at first when God was losing it in the Garden of Eden, or super soaking the world in a flood of anger. Instead, we figure that God’s Son also learned to smile (and eyeroll) when the bumbling, confused apostles totally missed the point of Jesus’ teachings, and began to argue which among them was the greatest.

This Holy Humor Sunday, feel free to wear the ugliest Easter hat you may have decided not to use last week, or your goofiest suit jacket or tie. Most of all, bring your sense of humor!

Self Delusion and the Ten Commandments

If you don't want to break a vase, don't chip away at its edges.

“Self-delusion is pulling in your stomach when you step on the scales.”
-- Paul Sweeney, author

This week we’re getting in touch with a remarkably familiar passage in the Hebrew Bible—the Ten Commandments.

I can tell you from experience that a number of people look at these absolute guidelines for living, and from them they derive a sense of relief. I’ve had people tell me, “well, I guess I’m doing pretty well, because I’ve never broken any of the Ten Commandments.”

Sunday services are presented online via Zoom on Sundays at 10 a.m. To join, open this link.

You may also view our services on our Facebook Channel. The livestream will begin at 10 a.m. Replays will be available immediately following the service. Go to www.FaceBook.com/DanburyChurch/Videos.

Fill out this form to receive eTidings in your email, as well as a $5 coupon for the Thrift Shop.

The thing is, if someone is going to avoid breaking a vase, it’s not a wise idea to start chipping away at its edges. Because one of these days, it’s going to be one chip too many.

By all means, congratulations that you haven’t knocked over a bank, or intentionally mowed down someone with your car. Congratulations that you’ve not been “coveting” your neighbor’s snowblower, or ignoring your elderly parents for over a year. But really, most of us don’t totally destroy a commandment all at once. We just chip away at it, in progressively small ways. It’s part of the way we practice self-delusion about the tiny sins we accumulate in our lives, like crumbs collect between the sofa cushions. They matter, and so do the consequences.

Personally, I find the stories of how we convince ourselves of our innocence to be often amusing.

Some years ago on Christmas Eve morning, my husband was inside the small Deli near our home, and had been chatting with the owner for a while. All of a sudden, there was a loud crash out front of the store. Since that’s where my husband had parked, he and the Deli owner ran outside, to see a man who had obviously started celebrating early with some holiday cheer. He had plowed his car into the back of ours. My husband walked up to his car window. “What were you doing, man? How did you hit my car?” The wobbly driver innocently declared, “You pulled out.”

We’ll spend some time with the more amusing aspects of human folly, and then with some of the more serious consequences of chipping the Ten Commandments in our daily lives.